It's finally happening! After 582 days, Australia's international border has reopened with the first quarantine-free arrival flights touching down this morning in Sydney from Singapore and Los Angeles. 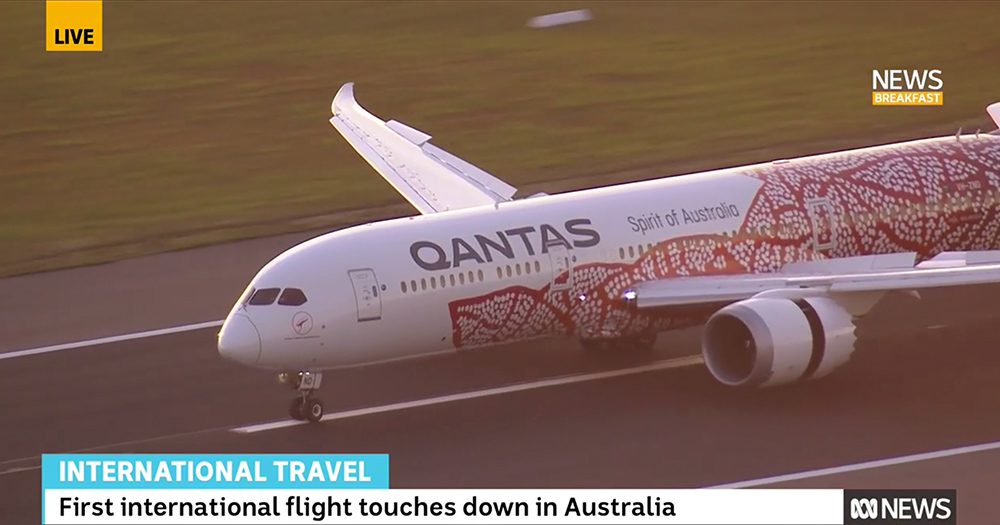 It’s finally happening! After 582 days, Australia’s international border has reopened with the first quarantine-free arrival flights touching down this morning in Sydney from Singapore and Los Angeles.

Get the tissues ready and crack the champers.

After 20 months, Australia’s international border has reopened for fully-vaccinated Australian citizens, permanent residents and their immediate families who can now return home quarantine-free or depart Australia without requiring an exemption to leave.

The first flight, Singapore Airlines SQ221 landed from Singapore early thanks to a strong tailwind and got special permission to land before the curfew ended.

In total, fourteen international flights are expected to land in Sydney today.

A Singapore Airlines flight from Singapore also landed at Melbourne airport on Monday morning, the first of five international planes scheduled across the day.

One man told reporters coming home was “a big deal” after being locked out for so long.

“So, we’re a bit overwhelmed and we just can’t wait to see our families. It will be amazing,” he said.

One woman said she was returning to see her father who was in hospital.

“I haven’t been able to see him for two years and they wouldn’t let me come in any earlier than today – so I got the first flight back,” she said.

The first flights herald the restart of international travel with the inaugural outbound departing flights leaving later from Sydney.

From today, Australians can fly to the United Kingdom, the US, Canada, Italy, Greece, Germany and South Africa, all without the need for any quarantining either way in New South Wales, Victoria and the ACT.

Qantas Group CEO Alan Joyce said: “This day has been a long time coming for our people and our customers. It’s wonderful to see Australians able to reunite with loved ones after such a long time apart.

“It’s been very challenging time for our international crew, with many of them stood down since March 2020. We are in the process of standing up our Australian-based team members who are excited to get back to doing what they love.

“We are back in the air earlier than anticipated thanks to the millions of people who turned out in droves to get vaccinated. This made it possible for the Federal, and NSW and Victorian governments to open up Australia’s borders and remove quarantine requirements for fully vaccinated travellers.

“International travel may be a little different for a while with some new requirements and guidelines in place, but one thing that hasn’t changed is Qantas’ commitments to safety and premium service. We are absolutely thrilled to welcome everyone back on board,” he said.

Qantas flight QF1 to London will depart tonight from Sydney at 1830 before transiting in Darwin for the first time ever and then directly on to London Heathrow.

Flight QF11 to Los Angeles will depart tonight from Sydney International at 2135. Both flights will be on Dreamliner 787-9s.

Qantas Customer Services Supervisor on QF12, Adrienne Innes, said being back in the air was the highlight of her year.

“It was amazing to welcome back our passengers, and the whole team was really emotional and excited to be able to take care of them on their journey home.”