Her Majesty The Queen and His Royal Highness The Duke of Edinburgh made their way to Southampton to officially name P&O Cruises' new flagship, Britannia. 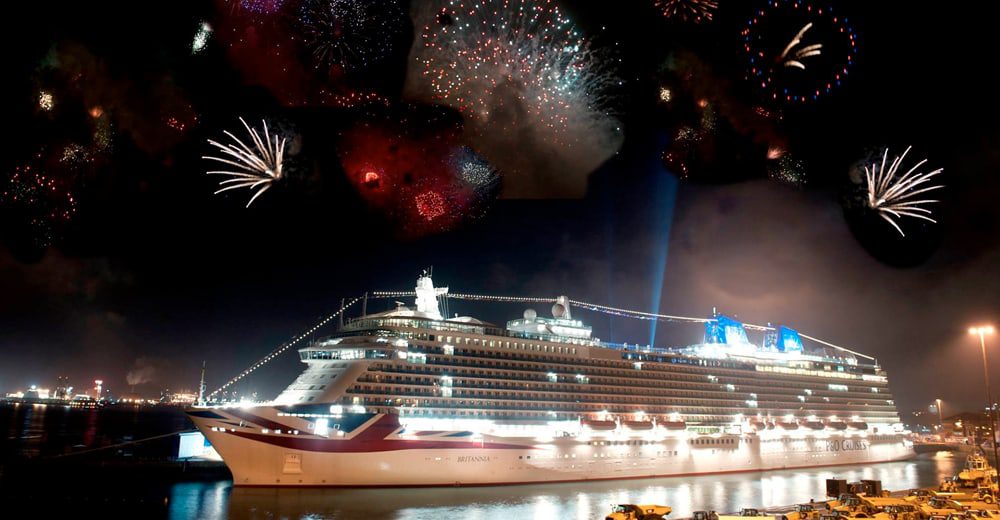 Her Majesty The Queen and His Royal Highness The Duke of Edinburgh made their way to Southampton to officially name P&O Cruises’ new flagship, Britannia.

In a glittering ceremony yesterday, Queen Elizabeth II used her gloved hand to push a button that dropped a bottle of British Wiston Estate Brut NV against the hull of the 3,600-passenger cruise ship.

It’s the second time Her Majesty has named a P&O ship, and her fifth vessel overall.

Britannia is the second P&O ship the Queen has named.

Although she’s had some experience with cruise ships, Britannia is likely to strike a bit of nostalgia, as it was the name of the royal yacht, which was in service from 1954 to 1997.

Weighing up to 143,000 tons, P&O’s new ship is the largest to be built by the company and is specifically designed for the British market.

Although designed for the UK market, Britannia has been a hit amongst Aussies.

Although mainly appealing to English travellers, the ship has been a hit amongst Aussie cruisers and in September last year, Australians made up 30 percent of world-wide bookings.

With her being so popular Down Under, we thought we’d prepare you for any client questions with a rundown of what’s onboard.

Britannia is the second P&O Cruises World Cruising ship to adorn a 308 feet Union Flag on its bow.

The livery was first introduced last year on Aurora as part of a fleet-wide makeover.

The flag is thought to be the biggest version of the Union Jack in the world.

From the outside, you can also see the ship has 15 passenger decks and the P&O Cruises’ name emblazoned on the hull alongside the Rising Sun branding.

The superior deluxe cabin aboard Britannia.

Catering to solo travellers, Britannia has 15 single cabins – more than any ship in the rest of P&O’s fleet.

Most single cabins come with a balcony and are equipped with a large flat screen TV, single bed and ensuite.

The inside cabins may not come with a view, but they do have flair through the bespoke artwork designed by British artists. They also have a large flat screen TV with films on demand and pamper packs from The White Company.

All of Britannia’s outside cabins have a balcony in addition to the amenities available in the inside cabins.

Cabins are designed to cater to families, with additional beds accessible to most rooms.

P&O has teamed up five popular food and pastry chefs to bring guests a series of culinary treats.

Free dining on the vessel is available at the Meridian and Peninsular on deck five and six. The rooms offer P&O’s ‘Freedom Dining’ concept, which allows guests to eat at selected restaurants anytime they choose between 6.30pm and 8.30pm.

The Oriental restaurant is another main dining restaurant, but has fixed-time seating and the same menu as Meridan and Peninsular.

And the Lido Grill on deck 16 gives guests the chance to enjoy a burger, vegetable kebab or classic fish and chips meal alongside the swimming pool.

Other free dining venues include the Grab & Go with a selection of pre-packed sandwiches; and Horizon – the main buffet restaurant featuring a live cooking station for pancakes, omlettes and noodles.

Sindhu (pictured above) is a fee restaurant serving dishes from the ‘master of spices’ one-star Michelin chef, Atul Kochhar.

In the restaurant Kochhar combines British and European ingredients while playing Indian-themed music.

The Glass House on deck seven serves fine wines and tapas-size dishes selected by wine guru Olly Smith and the Epicurian offers fine dining with classic elements for a sophisticated and contemporary evening.

Guests that want to learn to cook their own incredible dishes can join the Cookery Club on deck 17 where they will get tips from either James Martin, Eric Lanlard or Marco Pierre White.

The Starburst Atrium is the ultimate selfie spot.

Onboard, Britannia has a total of 13 bars, 13 dining venues, a 936-theatre, four swimming pools and an art collection.

Perhaps the most breathtaking part of the ship is the Starburst Atrium (pictured above), which is the ultimate selfie spot onboard.

It’s also important to note that one of the four swimming pools onboard is dubbed a ‘quiet zone’ meaning no kids.

Teens will be excited to hear they have their very own pool onboard – a first for the fleet – where they can hang out and meet new friends.

Children will be divided into age-appropriate groups and given activities and entertainment to match their group.

Britannia also has a night nursery, which is available to children from six months old to four years old and is only open between 6.00pm to 2.00am.

So, what do you think of Britannia?