Qantas CEO Alan Joyce has addressed National Press Club members in Canberra to air the views of airlines, retailers, rental car and parking operators and the rideshare industry, who Joyce says "are feeling the brunt of airport monopolies." Qantas CEO Alan Joyce has addressed National Press Club members in Canberra to air the views of airlines, retailers, rental car and parking operators and the rideshare industry, who Joyce says “are feeling the brunt of airport monopolies.”

Joyce’s address was in rare unison with that of Paul Scurrah, CEO of Virgin Australia, who together, urged the ACCC to intervene and tackle what they say is “an unregulated revenue stream in a monopoly environment.”

In his address, Joyce cited the below as key points why he believes the ACCC should step in to ensure Australian Airports provide a fairer landing pad for all.

“Australia is home to four of the five most profitable airports in the world. Funnily enough, they don’t rank nearly that highly when travellers rank the world’s “best” airports.” Joyce went on to say that “as a businessperson, I’m not suggesting for a minute that airports don’t deserve to turn a profit. Of course, they do. We want them to be profitable and to re-invest. But with margins like theirs, there is clearly something out of kilter.”

Talking to the broader impact on the Australian economy, Joyce explained that “high airport fees ultimately mean airfares are higher than they should be. Fewer people can fly or they fly less often. When you consider that most of Jetstar’s fares were sold for under $100 it’s not hard to see how $50 in airport fees can kill a destination altogether.”

Joyce then pointed out that he believes there is no current mechanism to resolve disputes, saying:

“You would think that if a monopoly exists, there would be a straightforward dispute resolution system as a safeguard. That’s how it works in other parts of the economy. Instead, we are left with disputes that cost millions of dollars over many years – making it an inefficient system.” 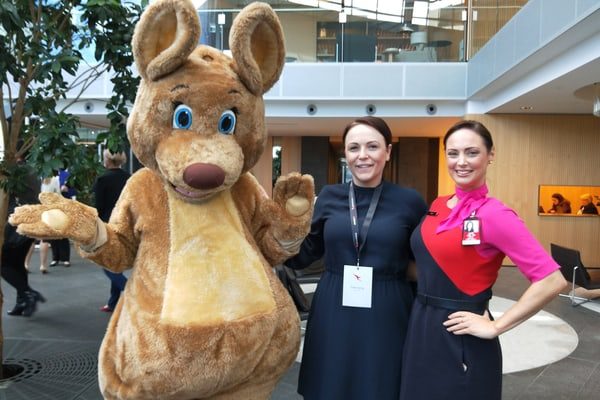 “I can’t see us flying from Perth to Paris before 2022 – more than two years from now. Had we not had this dispute, we could have been flying the route by early next year.”

Joyce says that this now “means that the Western Australian economy is missing out on more than $100 million of activity because of the delays to Perth-Paris caused by Perth Airport.”

In terms of finding a solution, Joyce said “this debate has been running long enough for us to know what the main rebuttals to our position are. So, let’s jump to that and save some time.”

“The main one is that airlines – especially Qantas – have plenty of commercial leverage they can use with airports. Ask yourself: would Paul and I be here today if that was the case?

“Australian airports are literally the only game in town. Their business model is based on it. We can’t just up-stumps and fly to the next airport 15 minutes down the road. They have airlines and passengers over a barrel.

“I’ve also heard people say, ‘You’re an airline CEO, of course, you want airports to drop their fees. You will just pocket the difference and boost your own profits.

“Well, the difference between Qantas and the airports is that we actually face real competition. We compete every single day with Virgin, Rex, Air New Zealand and in some cases dozens of airlines for customers.

“We compete on the price of every single seat of every flight. And it’s this competition which ultimately sets airfares. So, if there is a cost advantage, history shows that airlines will use it to sharpen fares. That’s why they’ve dropped so much over the past 10 years.”

Concluding his case, Joyce said: “clearly, the status quo isn’t working: fees and charges from monopoly airports are excessive and damaging the economy. And airports continue to reap super-profits because there is no real threat of intervention to moderate their behaviour.

“The good news is that there is a relatively simple solution, which we believe will help resolve deadlocks between airports and airlines, unlock investment, and drive increases in productivity.

“And other businesses operating at the airport – retailers, car rental companies and uber drivers – have backed the proposal.

“The Business Council of Australia met in Canberra today and a number of chief executives commented that they were heartened to hear the Treasurer recently say that tackling market power misuse will help ensure the most efficient allocation of resources and the most productive outcomes.

“We would suggest there is no better place to start than tackling the misuse of power by Australia’s monopoly airports. The Government could make this happen by introducing the reforms recommended by the ACCC.” However, airports have accused the airlines of acting in their own self-interest, rather than for their passengers.

“Qantas and Virgin want to squeeze competition out of the market to entrench the domestic duopoly and they know that’s exactly what will happen if they turn the screws on airport investment.”