"Next-generation" seating is what travellers can expect when boarding one of Qantas' A380 aircraft, assuming its the one double-decker jumbo jet to have completed a multi-million dollar upgrade. “Next-generation” seating is what travellers can expect when boarding one of Qantas’ A380 aircraft, assuming its the one double-decker jumbo jet to have completed a multi-million dollar upgrade.

Two years after announcing a mass refreshment of its A380 product, Qantas’ first upgraded plane took off with some 485 passengers onboard.

Chief Executive of the airline group, Alan Joyce, described the makeover as important to ensuring the aircraft maintained its popularity status among customers.

“The A380 is a crucial part of our long-haul fleet and this upgrade program will see customers enjoy everything the aircraft has to offer for years to come.”

Read on to discover what’s new in aircraft VH-OQK (that’s currently flying from Sydney to London via Singapore), and the changes coming to the other 11 A380s in the airline’s fleet:

WHAT CHANGES ARE ONBOARD? There are more seats in Premium Economy (pictured) & Business.

Following approximately eight weeks in the factory, aircraft VH-OQK emerged with the capacity to carry one extra passenger.

Qantas made the decision to reduce its Economy Class cabin by 30 seats in order to increase premium seating in Business and Premium Economy by 27 percent. As a result, there are now 70 Business Suites (up by six), 60 Premium Economy (up by 25) and 341 Economy (down by 30).

Inside the Business Suite cabin, guests will find Skybeds replaced with newer versions, all which are in a 1:2:1 configuration, giving each passenger aisle access.

Travellers will also find new Premium Economy seats that made their debut on Qantas’ Dreamliner, as well as a fresh new colour palette and improved inflight entertainment in the Economy cabin.

WHAT’S THIS ABOUT A NEW LOUNGE? ‘Smarter use of space’ was Qantas aim during the redesign. This has allowed the airline to expand its onboard lounge to offer seating for up to 10 Business and First passengers.

IS ANYTHING ELSE DIFFERENT?

Skybeds replaced in the Business Suites have been replaced.

The Flying Kangaroo had revealed two years ago that the First Class Suites would have luxurious bedding product, including new blankets and pillows by lifestyle brand, Sheridan.

More details of the onboard service will be revealed tomorrow.

WHEN WILL THE OTHER 11 AIRCRAFT UNDERGO THE MAKEOVER? 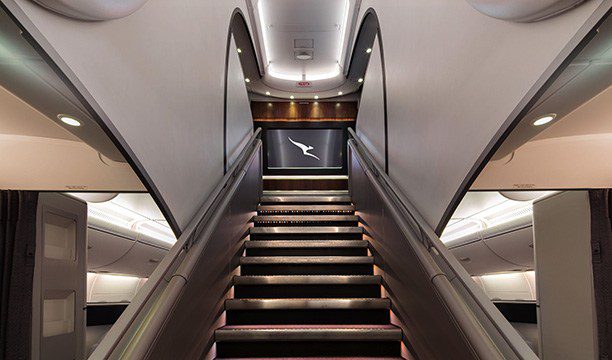 Before the end of 2019, there’ll be a total of three A380 aircraft flying around with the new look.

Qantas expects all 12 planes to have completed refurbishments by the end of 2020.

Click here to learn more about the airline’s A380s.