Bunnik Tours Managing Director Dennis Bunnik touches down in Colombo, Sri Lanka with the company's first international group departure for two years. Dennis shared with Karryon his first impressions of what was a magic, milestone moment for so many reasons. 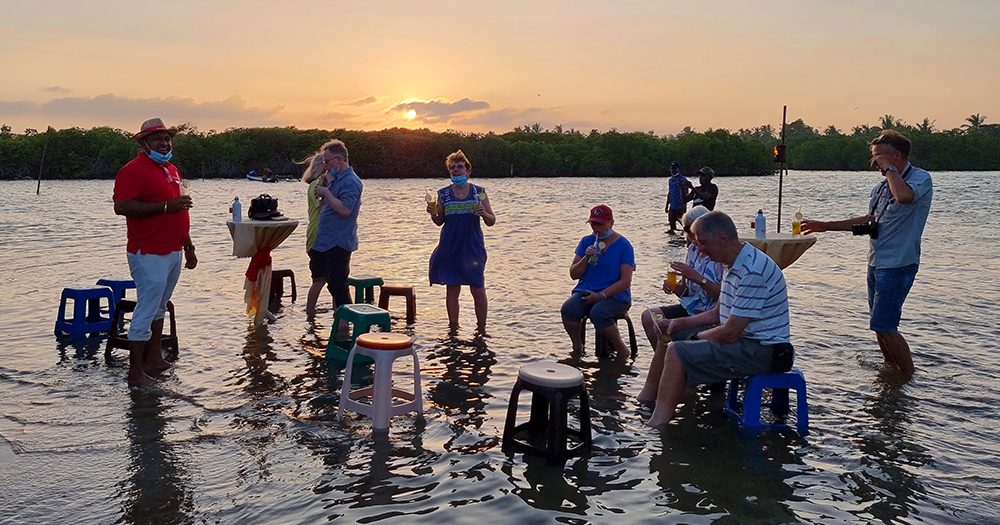 Bunnik Tours Managing Director Dennis Bunnik touches down in Colombo, Sri Lanka with the company’s first international group departure for two years. Dennis shared with Karryon his first impressions of what was a magic, milestone moment for so many reasons.

Full of anticipation for what lay ahead, the four of us were waiting at Colombo’s international airport.

With me was Priya – guide extraordinaire, he’s been with us since 2004 and our Sri Lankan tour has always been his baby, Gayashan – tall and totally unflappable, as airport rep he’s welcomed and farewelled thousands of our clients to this island paradise and finally Ryan – the operations and logistical wiz who just makes everything work.

Like everybody in travel and tourism, the past two years have been tough for these guys. But now things were finally on the up.

We’d arrived early and were pacing the arrival hall trying to keep our excitement down. It was Gayashan who spotted the first bright red luggage strap. With one word we were all by his side as he held his sign high above his head. In hindsight, we probably didn’t need the sign as the four of us in our bright red polo shirts were hard to miss!

One by our group emerged, were welcomed and layed with fragrant frangipanis. Introductions were made and the usual start-of-a-tour small-talk had commenced as we headed for the coach.

On the drive to the airport, Priya did his stuff but gave nothing away about what lay ahead for our arrival at the hotel.

The importance, emotionally, physiologically and financially of tourists coming back for the people that work in the tourism industry is huge and for them, it needs to be celebrated. Even if a group arrives at the hotel at 1 am!

Unbeknownst to me, while we were at the airport preparations were being made for our arrival that included a band, banner, special cake and bubbles. The musicians played as I got to cut the cake and the hotel general manager made a short speech welcoming us all to Sri Lanka and the hotel.

The first international Bunnik Tours group since March 2020 had arrived!

The first full day on this tour is always relaxed – a chance to unwind, laze by the pool and recover from the flight.  We met at 4 pm and Priya gave us the lowdown of what the next couple of weeks had in store. After a two-year break, he didn’t miss a beat.

We set off to start exploring Negombo and found ourselves cruising through the Dutch Canal out into the lagoon.  We passed the colourful boats of the local fishing fleet and kids fishing from the shore. The harbour made way for the mangroves and birdlife as the sun began to hang low in the sky.

On a small island, some locals beckoned us to come over and there, on a sandbank in the middle of the lagoon, stood Ryan and his crew. Behind them, with a perfect view of the sunset, they had cocktails waiting.

Sunset cocktails have a way of breaking the ice and by now the group was bonding and sharing a laugh.  This continued as we shared travel tales and enjoyed a private garden feast for dinner.

And just like that all of us forgot about the last two years and realised that travel was back!

Dennis also got time to create a flight review video with the aim of demystifying what flying is like now. The video covers the preparation needed pre-flight and then covers airport processes (Brisbane, Singapore transit & Colombo arrival) and the onboard experience on Singapore Airlines.