FREE AMUSEMENT: Where to find the only free amusement park in Los Angeles

Once you've exhausted all your designated theme park money at Disneyland, explored the back lots of Warner Bros & cast a few spells in Universal Studios, you may want to keep the fun going at... Once you’ve exhausted all your designated theme park money at Disneyland, explored the back lots of Warner Bros & cast a few spells in Universal Studios, you may want to keep the fun going at…

The only free amusement park in Los Angeles, which also happens to be the only one hanging out over the ocean.

Getting the full Santa Monica experience requires more than just a day visit as it has a number of treasures to be found on the main street and beyond. Among them is Pacific Park where travellers receive the only panoramic view of the Southern California coastline on the world’s only solar-powered Ferris wheel, the Pacific Wheel.

For those who prefer a little more of a rush in their theme park experience, the attraction is also home to a 44-feet tower ride called the Pacific Plunge as well as next-generation bumper cars fitted with dual joystick lever control and the ability to spin 360 degrees. Beyond the amusement park, local reps said Aussies will also appreciate the city’s environmentally friendly attitude as one of top 10 bike cities and the home to the Shore Hotel, a family-owned eco-friendly, environmentally conscious, and LEED Gold Certified hotel where guests receive views of the Pacific Ocean and solar-heated pools and spas.

“Santa Monica is about enjoying a car-free experience in Los Angeles.”

“You can use a bike, use your feet and if you shop too much, use Santa Monica free ride, which will pick up you and your shopping and take you to your hotel or even a little further afield.”

Have you tried Los Angeles’ only free amusement park? 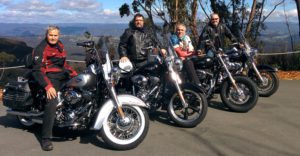