Japanese culture is an intoxicating mix of 1000-year-old traditions rubbing shoulders with the latest technological gadgetry on the planet. A curious blend of Eastern spirituality and collectivism, mixed in with equal doses of Western individualism and unbridled consumption. 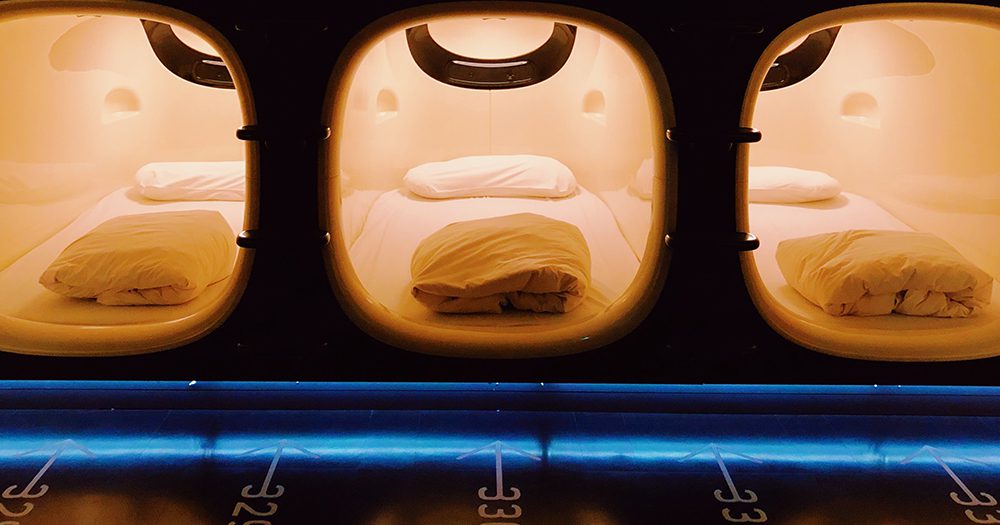 Japanese culture is an intoxicating mix of 1000-year-old traditions rubbing shoulders with the latest technological gadgetry on the planet. A curious blend of Eastern spirituality and collectivism, mixed in with equal doses of Western individualism and unbridled consumption.

And it is exactly this unique blend of seeming contradictions that makes Japan an absolutely fascinating travel destination to explore. There just isn’t another place in the world quite like it…

So it’s actually pretty easy to have a photobook of Japanese travel experiences that you’ll never, ever, forget. Memorability kinda comes with the territory here, and the hardest part will be deciding where and how you’ll spend your limited time, once international travel is back on the cards…

To help you in this pursuit, and because we’re always keen to sing Japan’s praises, we’ve compiled a list of four unique travel experiences that are as memorable as they are engaging, fun and just oh-so-Japanese.

1. Spend a night in a capsule hotel

Trust the Japanese to have invented the capsule hotel. If you think about it, it was kinda inevitable. Real estate in Japan, especially in cities like Tokyo, is sky-high, as space is a premium in a city bulging with over 30 million souls. So there’s that.

There’s also the Japanese work ethic which brought us the phenomenon of the salaryman – you know, those throngs of suit-wearing professionals you see on the first and last trains to the city centre, which, as you can imagine, doesn’t leave much time for sleep…

And that, my friends, is where the capsule hotel came in. Originally invented in Osaka and comprised of rows upon rows of small bed-sized capsules or pods, these pint-sized lodgings are much cheaper than a regular hotel room and were initially catered to office workers on a budget. However, these days, they appeal to just about anyone looking for a place to sleep that won’t break the bank.

Although capsule hotels are by definition quite minimalistic, these days you can find them in a cool and quirky variety of themes and styles – from traditional to ultra-modern. Spending a night in a capsule hotel is without a doubt a quintessentially Japanese experience and an absolute must-do that you’ll never forget…

2. Take a walk through wisteria tunnels

Feel like you’ve been transported into a fairytale by making the trip down south to the island of Kyushu and walking through the world-famous Kawachi Fujien Wisteria Garden and its 100-metre-long tunnels of beautiful wisteria.

You’ll need to coincide your trip here in spring or autumn though, as these flowers (from dark purple through blue to white) only bloom twice a year. But when they do – absolute magic!

Another quintessentially Japanese experience that you’ll never forget, a sumo tournament in Japan is a big deal. The national sport of sumo is taken very seriously here, and watching these big men in diapers battle it out is a fascinating insight into Japanese culture.

There are six grand sumo tournaments every year in Japan, and they’re held all over the country. If you’re planning on visiting the fascinating city of Fukuoka down in Kyushu, make sure you visit in November so you can attend the tournament and finally tick this essential Japanese experience off your bucket list once and for all.

Oh, and make sure you come early so you can see the up-and-coming champions battle it out before the big boys take the stage.

Here’s something a little different…

With so many felines, Tashirojima – otherwise known as Cat Island – has become a popular tourist attraction, not just for hard-core cat lovers and crazy cat ladies, but for anyone interested in a unique travel experience.

The perfect day trip from Sendai in the Tohoku region of Honshu, you’ll see cats literally everywhere here: strutting their stuff down the streets, chilling in the sun, posing for photos in the shade, and generally just doing what cats normally do – ignoring you!

Originally brought onto the island to help contain unwanted pests that were getting in the way of the island’s silkworm industry, the cats have struck up an amicable relationship with the townspeople, who would feed these semi-wild cats.

Now, several decades later, the cat population has multiplied significantly, whilst the human population has declined, resulting in an overwhelming feline majority. Indeed, cats outnumber humans four to one here!

A trip to Japan is full of unforgettable moments which are unique to the destination. Whether it be the cuisine of Japan, getting outdoors in nature, experiencing Japan’s beautiful winters, finding balance and wellness or uncovering a culture that is as unique as it is diverse – there are always unforgettable moments to be had in Japan.

Everyone has had their own unique and wonderful experience in Japan, or dreams of experiencing unique moments. Share your personal experience or what you hope to be your most memorable moment in Japan to win!

The winner of the best culture pic or yet to be had unique cultural experience will be announced on 24 February 2021. A Festival in Light: Get Ready For The NT's Parrtjima In April